This past weekend the Beach BBQ and Brew Fest http://beachbbqandbrews.com/ took over Woodbine Park for 3 days. Other than a short interlude of rain Saturday night and first thing Sunday morning, the event was ablast!

US and Canadian Teams served the usual fare that was happily washed down with the assistance of local craft beer artisans. I have attended others throughout the province and have to say that “The Beach”, (formerly The Beaches, but that’s another story) embraced the event and instilled its sense of calm and relax amongst the revelers. It was a blast! 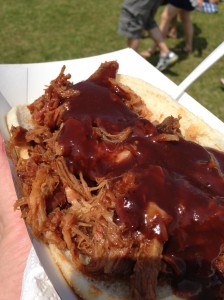 Pork bliss in the Beach

All the participant’s smoked treats were good but my particular tastes ran to the ribs and Alabama Pulled Pork that Camp 31 was offering.  The diehards and smoke heads knew the biggest lines offered the best fare.

BBQ demands beer and the craft artisans didn’t disappoint. I did get introduced to #Crabbie’s Original Alcoholic Ginger Beer, a refreshing different taste with a bite. Quite nice!

Presentations led by Ted Reader marked the big tent. Ted’s take on Warm Bourbon brownies with bacon and blue cheese made my heart stutter for a second. But as everyone knows, bacon makes everything better!

I finished Sunday as a judge for the Amateur Rib contest. Everyone that entered deserves kudos for having the guts to put their money where their mouth is.  Good ribs all around and well done.

So I have a back log of food photos to catch up on. Watch over the next few days.

Because of the meat overload, tonight is #BGE tomato roasted soup, grilled corn with oregano/ chévre butter and homemade bread.  Dessert is rotisserie pineapple with grilled pound cake and rum whipped cream.  OK, so we’re good with the veggies and not so good with the dessert.

Be well and eat well 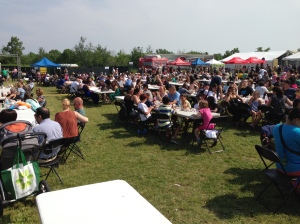 All things foodie in, out and all about

Becoming is Superior to Being

I come closest to succeeding by sharing.

Creative Writing with the Crimson League

Still Trying to Figure Things Out

Food with a View

Food made for me, by me and by others. Follow me @foodfrankly .

tassybakes
Spiritbath
The Vulgar Chef
Rantings of an Amateur Chef

One girl's adventures into baking, crochet and other crafty endeavours...

Adventures in grilling,barbecue and beer